The beauty of Gallipoli surprised me. If I had known the meaning of the word, I would have been better prepared - "beautiful place." An early exit from Istanbul ensured we arrived at the Gallipoli Peninsula in time for a leisurely inspection of Anzac Cove, Lone Pine, Chunuk Bair, the Turkish and New Zealand memorials and Simpson's grave. Our Turkish guide spoke with great respect for the ANZACS, in what he called the "The Gentlemen's' War." It was an emotion-charged afternoon

A MASTERPIECE OF HUMANITY

This is how UNESCO described Latvia’s Song and Dance Festival, held every five years. We are fortunate to be in Riga during the Celebration in July this year.Can't wait! 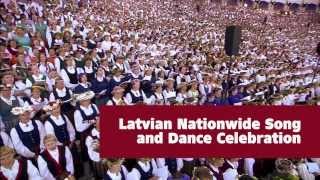 If you walked the streets of any city or town in Israel/Palestine last Wednesday, drove any of the well-sealed roads, you would have heard the siren. It invites every Israeli to stop and remember the six million. “Never Again.”

IT COULDN’T BE DONE

Somebody said that it couldn't be done, But he with a chuckle replied, That "maybe it couldn't," but he would be one Who wouldn't say so till he'd tried. So he buckled right in with the trace of a grin On his face. If he worried he hid it. He started to sing as he tackled the thing, That couldn't be done, and he did it! Somebody scoffed: "Oh, you'll never do that; At least no one ever has done it;" But he took off his coat and he took off his hat And the first thing we knew h

ONE OF MY FAVOURITE QUOTES

A LITTLE DARK HUMOUR FOR FRIDAY

THE ANSWER TO YESTERDAY'S MYSTERY QUESTION